Since a picture says more than a 1000 words, first we would like to invite you to watch a short video that presents our project, and which will be broadcasted on 02/03/2015:

After the picture, the words: 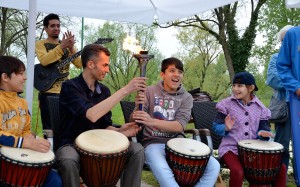 This project started in September 2013 in collaboration with the Center for Training and Education “Slava Raškaj” from Zagreb. In consultation with management and professional team, we organized therapeutic drumming workshops for children with hearing impairments and multiple communication difficulties. During the school year 2013/14, 20 children from Center “Slava Raškaj” participated in 60 workshops and did 10 public performances. Since September 2014, the elementary school “Jabukovac” joined us, in the way that their pupils participate in workshops together with children from the Center “Slava Raškaj”. This way, beside rehabilitation these workshops became a social inclusion tool as well. Children with hearing impairment are given opportunity to meet and socialize with their peers from their neighborhood (children from “Slava Raškaj” are otherwise socially isolated due to the specificity of theirs way

of communication – sing language, so they socialize almost exclusively with each other, without significant contact with the outside world). On the other hand, pupils from ES “Jabukovac” were given the opportunity to develop a sense of community and a tendency towards volunteerism, and cultivate their empahy as one of the basic prerequisites for healthy maturing. The crown of our work is Christmas concert in the “Vatroslav Lisinski” Concert Hall, which was held on 12/18/2014. Participants of our drumming workshops performed at this concert, accompanied by Armed Forces Symphonic Wind Orchestra. Together, they performed compositions “Little Drummer Boy” and “Radetzky March” to the delight of a full house:

The soloists of the concert were Croatian singing stars such as Marko Tolja, Maria and Ivana Husar, and guests were the choir “Izvor” and klapa “Sv. Juraj of Croatian Navy.

In the meantime, we have presented our project on state meeting of music teachers which was organised by Croatian National Agency for Education. As a result, we were contacted by a large number of primary and secondary schools from all over Croatia who are interested to be involved in this project. The interest was also expressed by Croatian Red Cross, Zagreb Rehabilitation center, Stančić Rehabilitation Center, and many other organisations and institutions that care for children with disabilities. Due to the great interest, our plan is to include in this project pupils from 10 primary schools in city of Zagreb and Zagreb County and 100 children with disability from local communities.

Despite the fact that the project has been implemented under the auspices of the President of Croatia, the fact it received a positive opinion from the Croatian National Agency for Education, that it was approved by the ministry of Science, Education and Sports for implementation in primary and secondary schools, as well as it received support of numerous public figures, until today our association financed all activities related to the action independently, exclusively with our own resources, and all staff involved in the implementation all of the worked (and still do) voluntarily. Continuation and expansion of the action requires additional funding, which our association allone cannot provide (quality instruments, other associated equipment…).

Since the project is currently expanding on working on plastic drums – half toys, for continuation of the project and more significant results, it is necessary to get new, better quality drums, each of which costs around 300€.

If you wish to help us continue our activities, please donate fundus for the purchase of instruments and other equipment to our association:

Thanks for your support!